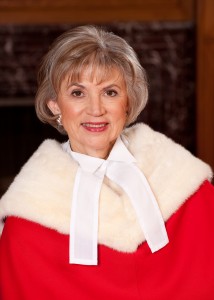 In addition to her judicial duties at the Supreme Court, the Chief Justice chairs the Canadian Judicial Council, the Advisory Council of the Order of Canada and the Board of Governors of the National Judicial Institute.

The Chief Justice is the author of numerous articles and publications.

Photograph supplied by and copyright held by the Supreme Court of Canada, photo credit to Andrew Balfour. 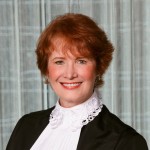 Catherine Anne Fraser was appointed Chief Justice of Alberta in 1992, the first woman to be appointed chief justice of a province in Canada.

Over the past two decades, Chief Justice Fraser has been instrumental in advocating for the rule of law, judicial independence and human rights internationally. She has been involved in judicial education initiatives across the globe, including Australia, New Zealand, England, India, Pakistan, Sri Lanka, Serbia, Croatia, Taiwan, Zimbabwe and, most recently, in the Palestinian Territories. She has worked with judges from many of these countries and spoken and written on a wide range of topics.

Chief Judge of the Provincial Court of Alberta

The Honourable A. Gail Vickery

Chief Judge Vickery, a native of Winnipeg, Manitoba, graduated law school from Nova Scotia’s Dalhousie University in 1975 and articled with the firm of Macleod Dixon in Calgary, Alberta.  She became a partner of that firm in 1984.

In 1995 Chief Judge Vickery became an International Partner in Macleod Dixon .  As the Chief Representative of Macleod Dixon in the Republic of Kazakhstan, she established the Almaty office and then an office in Mongolia. The client base during her four years in Kazakhstan included international natural resources companies from Canada, England, Australia and the United States.  She acted for the Government of Kazakhstan in the largest privatization undertaken by that country.  Retained by the European Development Bank, she worked in Tashkent with the Government of Uzbekistan to develop guidelines for its proposed oil and gas regulations and, upon  the recommendation of the Canadian Government through the Canadian Embassy in Kazakhstan, she was retained by the Government of Kyrgyzstan to assist with maintenance of that country’s registration with The World Trade Organization.

In addition to her busy career, community work has always been important to Chief Judge Vickery. While a practicing lawyer, she acted as Director and Legal Advisor to Aunts at Large and was President of Calgary Family Services. She continues to support many community initiatives in her capacity as Chief Judge of the Provincial Court of Alberta.

Chief Judge Vickery and her husband, William (Bill) Olson, reside outside Calgary. They are proud grandparents of eight grandchildren.

Chief Justice of the Ontario Superior Court of Justice

A graduate of Queen’s University Law School, The Honourable Heather Forster Smith was called to the Bar in 1973. Known as a trailblazer, she entered the legal profession at a time when that career choice was still considered a non-traditional one for women, particularly in her area of practice — criminal law.

Following her call to the Bar, she was hired by the Department of Justice (Canada) as its first female Crown prosecutor. Her success in that role led to her appointment as senior counsel.

Throughout her legal career, Chief Justice Smith has served as a leader for women and for the administration of justice.

As Chief Justice, her passion for sound judicial process, good governance and the better administration of justice has been a driving force for change in the judicial system in Ontario, and for continuous improvement in access to justice for all Ontarians.

Chief Justice Smith is a member of the Canadian Judicial Council. She is married to Senator David Smith, Q.C., a former federal cabinet minister.

Chief Justice of the Ontario Court of Justice

The Honourable Annemarie E. Bonkalo was appointed Chief Justice of the Ontario Court of Justice in 2007.  She holds a B.A. (Honours) from Queen’s University, an M.A. Criminology from University of Toronto and an LL.B. from Queen’s University.  Called to the bar in 1978, Chief Justice Bonkalo was appointed the first female Assistant Crown Attorney in Peel Region in 1978.  She was appointed as a judge of the Ontario Court (Provincial Division) in 1990, Regional Senior Judge Toronto Region in 2004 and Associate Chief Justice in 2005.  She has lectured in the areas of criminal law, advocacy and court administration.

The Ontario Court of Justice is one of Ontario’s two trial courts and deals primarily with criminal and family law cases as well as youth criminal justice matters.  It is also the largest trial court in Canada and is currently composed of 284 judges and 345 justices of the peace, serving a population of more than 12 million in a province that has a surface area of over 1 million square kilometres.

Chief Justice of the Supreme Court of Prince Edward Island

Information will be provided when available.

The Honourable Nicole Duval Hesler was elevated to the position of Chief Justice of Quebec on October 7, 2011. She was appointed to the Quebec Court of Appeal in 2006 and to the Superior Court of Quebec in 1992. The Honourable Duval Hesler was admitted to the Quebec Bar in 1968. The same year, she joined the Montreal firm of Buchanan McAllister, later known as McAllister, Blakely, Hesler & Lapierre, in which she became a partner in 1976.

During her twenty-four years of practice as a lawyer, Madam Duval Hesler specialized in litigation, particularly in the areas of civil liability, product liability, construction law, bankruptcy matters and environmental law. She represented the Order of Architects of Quebec before the National Assembly Committee on the reform of the Civil Code of Quebec.

On a parallel career track, Madam Duval Hesler was appointed a member of the Federal Human Rights Tribunal in 1979 and presided over many Human Rights Tribunals thereafter. She gave training seminars for the Quebec Human Rights Commission on the subject of proof of discrimination. In 1990, she was also appointed a member of the Board of Directors of the Corporation of Medical Professionals of Québec by the Office of Québec Professionals.

Chief Judge of the Court of Québec 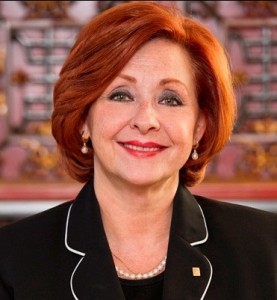 Called to the Bar on January 11, 1974, Élizabeth Corte practised her profession exclusively at the Montreal offices of Legal Aid. At the time of her appointment to the Cour du Québec, she was the assistant director of legal services in criminal and penal affairs.

In addition to teaching criminal law at École du Barreau de Montréal since 1986, she has given courses on criminal procedure and evidence at Université de Montréal’s École de criminologie. She was also a member of many committees on the administration of justice in criminal matters.

During her law practice, she was regularly invited as a guest speaker or expert, notably by the Federation of Law Societies of Canada, within its National Criminal Law Program in 1999 and 2000.

On November 15, 2000, she was appointed judge at the Court of Québec’s criminal and penal division. Then, in October 2005, she was named associate coordinating judge of that same division, in Montréal.

On October 21, 2009, the Québec government appointed Élizabeth Corte Chief Judge of the Court of Québec for a 7-year term of office. She is also the President of Québec’s judicial council (Conseil de la magistrature du Québec).

Responsible for the overall management of the Court, she is moreover the representative and spokesperson in dealing with the government and with the other courts in Québec as well as with all other judicial bodies in Canada. By the concrete actions identified in the Three-year Vision 2012-2013-2014 of the Court of Québec, the Chief Judge seeks to promote an administration of justice based on better access to it.

Chief Judge of the Provincial Court of Saskatchewan

The Honourable Carol A. Snell

Judge Snell received her B.A. from Queen’s University at Kingston, Ontario in 1972 and her LL.B from the University of Saskatchewan in 1977 following which she articled with the Saskatchewan Department of Justice.

In 1978 she co-authored a manual on Breathalyzer Law in Saskatchewan and prepared precedent materials for prosecutors.  In 1979 she was hired as a Crown Prosecutor and for 5 years she worked as a trial prosecutor in Regina.  In 1984 she moved to the Prosecutions Head Office where her duties included supervision of trial Crown prosecutors, participating in decisions on Crown appeals, appearances for the Crown in the Saskatchewan Court of Appeal and the Supreme Court of Canada, and policy and criminal law reform projects.