Monday, May 6, 2019 (Halifax, NS) – To help mark its 25th anniversary this year, the Canadian Chapter of the International Association of Women Judges (CCIAWJ) is honouring two of its Past Presidents with a Lifetime Achievement Award.

The Hon. Petra Newton of the Ontario Court of Justice was in Halifax last week to receive her award, as part of the 2019 CCIAWJ national conference. The second recipient, The Hon. Danielle Côté of the Court of Quebec, was out of the country and unable to attend the ceremony.

“The mission of the CCIAWJ is to enhance the work of women judges nationally and internationally in pursuit of equality, judicial independence, and the rule of law,” said The Hon. Mona Lynch, a Justice on the Nova Scotia Supreme Court and the current President of the CCIAWJ. “Even before their involvement in the CCIAWJ, Justice Newton and Justice Côté devoted many hours to initiatives that enable women to participate meaningfully in the justice system.

“On behalf of all our members, we are very pleased to pay tribute to these deserving and distinguished jurists.” 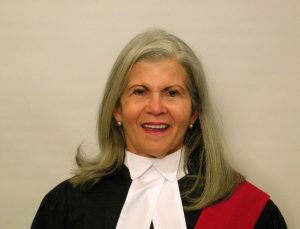 Prior to being appointed a Judge in 1989, Justice Petra Newton worked asa Prosecutor with the Department of Justice in both Manitoba and Ontario, and before that as criminal defence counsel and Legal Aid duty counsel.

She has been a panelist at numerous continuing education and law school programs on a variety of issues, including women and girls in the justice system, retention of women in the legal profession, criminal advocacy and aboriginal justice. Among her most significant contributions has been to the Board of theInternational Association of Women Judges (IAWJ) and The Gale Moot.

Internationally, Justice Newton was a member of the Canadian Delegation at IAWJ Conferences in Australia, Panama, South Korea, London and Washington. In 2014 she was elected to the IAWJ World Board of Directors representing North America for the term 2014-16 and was re-elected in 2016 for the 2016-18 term. 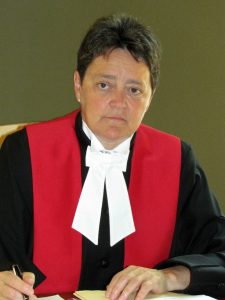 Justice Danielle Côtéwas admitted to the Bar in 1978, specialising in labour law and corporate law. In 1983, she was appointed Deputy Attorney General to practise criminal law in Sherbrooke, Que. From 1989 to 1994, she was a criminal prosecution lawyer at the Federal Department of Justice in Montreal.

Every two years, the CCIAWJ works with the National Judicial Institute to organize a conference for Canadian judges somewhere in Canada. This year, the conference was held April 30 – May 2 in Halifax, N.S. The Modern Court: Adapting to Judging in a Complex Age, focused on issues like implicit bias, intercultural communication, public education and accessibility of the Courts in today’s changing media landscape.

The International Association of Women Judges (IAWJ) is a non-profit, non-governmental organization whose members represent all levels of the judiciary worldwide and share a commitment to equal justice for women and the rule of law. Created in 1991, the IAWJ has grown to a membership of more than 6,000 in 100 countries, including Canada, which joined in 1994.

For more information on the Canadian Chapter, please visit https://iawjcc.com/.